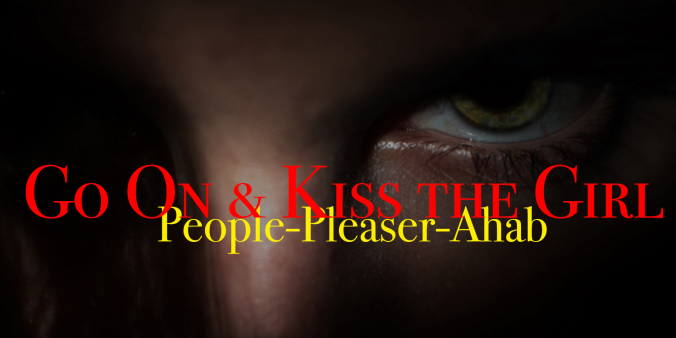 I think I have King Ahab figured out.

He may have been a pretty nice guy…just don’t tell Naboth that.

He is a people-pleaser.

Scripture describes a particular incident between Ahab, his nasty wife, Jezebel, and a citizen named Naboth. 1st Kings 21 says Ahab saw this great garden right by his palace and it was owned by Naboth. Ahab thought it a good idea to have that garden so he would have veggies close at hand.

What’s a king to do?

Most kings of the time would probably tell Naboth to find a new garden…“It’s mine, all mine!”

But Ahab was actually pretty honorable. He said,

“Give me your vineyard, that I may have it for a vegetable garden, because it is near my house, and I will give you a better vineyard for it; or, if it seems good to you, I will give you its value in money.”

He offered a better one or cash. That seemed pretty fair.

However, Naboth had good reason to refuse Ahab and told him it was part of his family inheritance. They did not just give away their inheritance back in those days. It was pretty impressive that Naboth felt safe enough to reject his king.

But King Ahab went home and sulked. He accepted Naboth’s rejection but was quite torn up about it. He clearly was lusting after that piece of property.

Go On, and Kiss the Girl

So, in his sulking, that Jezebel of a wife showed up to save his day. She told her hubby,

“Do you now govern Israel? Arise and eat bread and let your heart be cheerful; I will give you the vineyard of Naboth the Jezreelite.”

She reminded him he had absolute power – because that is how she thought of his position of authority. She knew nothing of God’s requirements for the King of Israel (Deuteronomy 17:14-20). Jezebel did not put up with insubordination no matter the reason. My guess is she could not allow the image of her family be tarnished by a commoner.

So, she took care of the problem.

She did so by hiring a couple “worthless fellows” and acting suddenly religious. With Ahab’s stamp on the orders, she proclaimed a “fast,” which would normally mean a humbling of the nation before the Lord and prayer. But instead, she used it to bring false accusations against Naboth that he bad-mouthed God (and king).

And he was stoned to death.

King Ahab arose from his sorrow and went “down to the vineyard of Naboth the Jezreelite, to take possession of it.” Just like that it was taken care of.

But that is not all. The Lord will not be mocked by Ahab’s foolish compromise with evil to be done in his name. The Lord proclaimed that,

Behold, I will bring disaster upon you. I will utterly burn you up, and will cut off from Ahab every male, bond or free, in Israel.

And he told Jezebel,

“The dogs shall eat Jezebel within the walls of Jezreel.”

The Lord does what he says. Jezebel was indeed eaten by dogs…

But, following this pronouncement, Ahab actually humbled himself before the Lord, though Jezebel did not. He tore his clothes, put on sackloth, and fasted. God noted his humility and promised to withold his judgment during Ahab’s days.

You really get the sense that Ahab was not such a bad guy afterall. He is not the beastly abuser of whom so many stories are told in scripture. He has some humility. He was not going to force himself upon Naboth despite having the power of king.

But his people-pleasing created problems. Especially for Naboth.

As a leader he was unable to stand against that which was evil – an abusive, horrible wife. He could not say, “No” to her. He was willing to submit to horrendous wickedness because of his lust for land and desire to please Jezebel.

There are many leaders out there in this category. Where many leaders that I write about are mean and controlling, Ahab leaders are ineffectual and hurt their organizations not through meanness but through failure to actually lead.

They fear others and will compromise with evil to make them happy.

The tail wags these dogs. Just as Jezebel wagged Ahab.

Note: There is an excellent business text on leadership traits where I first saw this particular type of leader discussed.