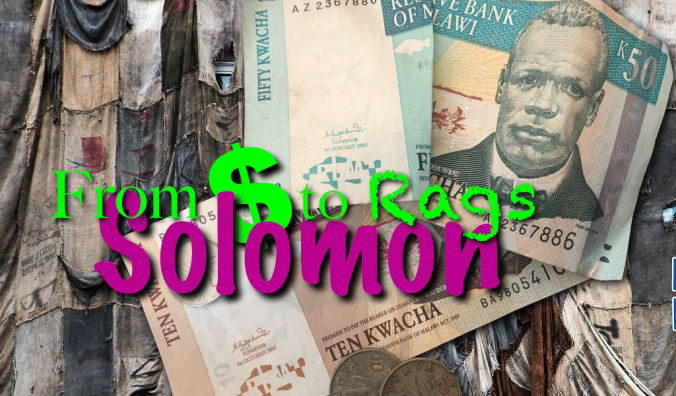 It all started so well. A good looking and humble guy.

The first book of Kings describes King Solomon as a godly man. He “loved the Lord, walking in the statutes of David his father.”

And if that wasn’t clear enough, when asked by the Lord what his desire was, his response was to ask for wisdom to rule Israel. He humbly admitted that he was “but a little child.” He confessed that he was not adequate on his own to govern God’s people.

Leadership in God’s kingdom must fundamentally be about dependence on the Lord to gift and guide. Those who lead must be built to lead and then they must be directed. That building of leadership qualities and guidance are from Jesus Christ.

Though a leader may not be born, all that he has has been given by the Lord. His abilities. His material wealth. His opportunities. So, whether a leader becomes a leader after the hard work of study and practice or was a leader since birth, it all comes from the Lord.

It was said of Solomon:

And the whole earth sought the presence of Solomon to hear his wisdom, which God had put into his mind.

God had put into his mind all the wisdom he had. It all came from the Lord.

Therefore, the acknowledging of God’s gifting and help are essential to a good leader. Because God expects him to acknowledge God’s gifts to him.

And, it is by God’s guidance that the leader leads. God has given scripture (special revelation) and a world of wisdom (general revelation).

The good leader is dependent on the Lord for His guidance by His Holy Spirit enlightening the Words of scripture. He studies to know God’s Word as the kings of old were commanded:

“And when he sits on the throne of his kingdom, he shall write for himself in a book a copy of this law, approved by the Levitical priests. And it shall be with him, and he shall read in it all the days of his life, that he may learn to fear the Lord his God by keeping all the words of this law and these statutes, and doing them, that his heart may not be lifted up above his brothers, and that he may not turn aside from the commandment, either to the right hand or to the left, so that he may continue long in his kingdom, he and his children, in Israel.”

God’s leaders need to be immersed in God’s Word. That is a tall order and an order that Solomon seemed to understand.

And God’s leaders must also be wise to God’s “general” revelation. God has set in course rules of nature that may be studied and applied to act wisely in this life. That which is not clearly contained in His Word may yet be His means of directing a leader in wisdom.

Being a good engineer is founded upon studying God’s established physical universe. Working with the minds of men depends on understanding both the spiritual and physical complexities of his brain. So, the good leader studies God’s world to know with wisdom how to respond to the needs of his stake-holders.

Solomon astounded the people by his wisdom, in one case shocking his attendants by suggesting a baby be cut in half to determine who the correct mother was. He did not know how to do that by God’s law but by the Holy Spirit enlightening him to the events playing out before him.

But the typical happened. And, it is a lesson for leaders everywhere.

Scripture says Solomon was wiser than anyone around. He was an exceptional leader and blessings of a material nature clearly followed him. Everything he touched, it seems, turned to gold.

And yet, he did what so many leaders do after starting well.

After building a beautiful temple for the worship of the Lord, at God’s direction, Solomon was turned. In his arrogance and power he married any woman he wished and used his subjects for his own ends.

The law expressly forbid marrying women not of Israel. Not out of spite or arrogance but because, as scripture explains, “You shall not enter into marriage with them, neither shall they with you, for surely they will turn away your heart after their gods.” [1 Kings 11:2b] Solomon also made a house…for Pharaoh’s daughter whom he had taken in marriage.
All these were made of costly stones…

And, scripture says they turned him away to other gods. After building a magnificent sanctuary for the worship of the one true God, he built places of worship [high places] for several other gods. Abomidable gods it says.

Art Thou the Man?

Are you going to be turned?

After being given opportunity to lead and being overwhelmed by the responsibility, were you humbled? Did you see it as a gift from the Lord to be given that great privilege of leading? Did you fall on your face before the Lord asking Him for wisdom to lead?

Now, consider how far you can fall.

God was gracious to Solomon in leaving him in charge until he died (with rough spots along the way). But the Lord explained that Solomon’s legacy would be in rags. After such a great start, the Lord is said to be angry with Solomon.

Solomon’s legacy was the split of God’s people (Israel and Judah). They followed separate leaders and Israel especially followed Solomon’s example. The northern tribes (Israel) chose their own place of worship and ended up falling to conquerors (sooner than Judah).

It was a disappointing end for a thrilling start.

Book by Editor of P&S

Kelly Dehnert, Editor of Pearls and Swine, has written a book about his family’s life in Africa as missionaries. The book provides helpful insights to engaging other cultures.

What others say about the book:

[To Africa On a Lark] is extremely readable, with an easy to follow flow. The stories are quite engaging…The overall theme of cross-cultural adjustment, with the “razor” image, comes through clearly. I hope that many will read, enjoy, and benefit from your engaging string of accounts.

One thought on “Solomon: From Riches to Rags”