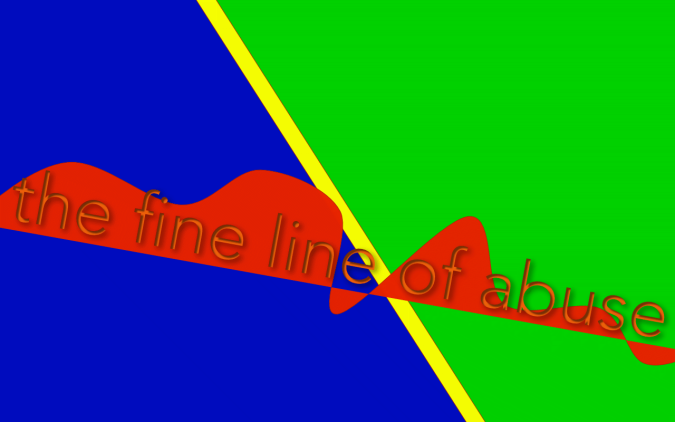 The continuum of abuse provides for both hope and confusion.

Recently, I had the experience of confusion as I waded through the mire of a pastoral leadership and marital failure. I had heard “testimony” of his failures and then watched as a group of elders tried to work through the muck of the mess he had created.

In the end it was determined he was not an “abuser” but the depth of failure in his familiel relationship made it necessary for him to step down as a church leader.

It was confusing as his actions have appeared abusive and controling and yet, he could admit to some of those failings and willingly give up his position. The latter is evidence of “non-abuse” but the earlier evidence of being an “abuser.”

The Continuum of Abuse

Much like Dr. George Simon, psychiatrist and author, notes regarding the continuum of narcissistic trates in all people [Simon], it may be more helpful to understand abuse in on a continuum.

Current psychology suggests that rather than a full-blown disorder, as it was classified in the DSM-4, narcissism is no longer a distinct category of personality disorder. Many psychologists see it as a trait that appears at varying levels of degree in every person. On a continuum.

In other words, we are all rather self-focused, but some more than others.

If we are at all self-aware when we look at abuse characteristis such as lack of empathy, need for control, manipulation, and general meanness, we may begin to consider ourselves to be “abusers.” We all strike out in some form when angry and seeking to get our selfish way.

But I would suggest that most people are not “abusers,” but likely are at times “abusive” in their behavior.

The “abuser,” though made in the image of God, is in a sense identified by his behavior as it is fundamental to how he operates in relationships. The “abusive” individual is aware and responsive to his relational flaws. All those traits can be seen on a continuum in real life.

There is a significant difference the abuser and abusive and those differences determines how we engage those who are acting abusively. After considering the distance along the abuse continuum the individual has traveled, our engagement of them can be determined.

It is well understood by specialists in abuse such as Bancroft, Simon, Crippen, Langberg, et. al. that abusers must be handled in very specific ways. “Abusers” are different, as this blog has noted at various times than “abusive” people. Abusers do not respond to confrontation. They do not listen to pleading.

All normal means of helping someone become more kind do not work with “abusers.”

But there are those who have abrasive personalities, who lose their tempers more frequently than most, and generally have more difficulty understanding how others are feeling.

You know abrasive individuals and maybe even stay clear of them when you can.

They may not respond right away to a confrontation regarding their behavior, but do in time recognize and desire to change, hopefully even apologizing.

But when there is confrontation of one who can be identified as an “abuser” there is no response or if they do it is because it is necessary to control their situation by manipulating the confronter. The Bible character, Saul, can be considered this type.

An example would be a superior calling a subordinate to account for his abusive behavior. Because “abusers” are master manipulaters, they know to submit if it means keeping their job or keeping the individual in their pocket, so to speak.

More often than not, when an abuser is confronted by a subordinate or one lacking power in the situation, they will rarely accept any kind of responsibility for their actions.

That continuum can mean reconciled relationships or further trauma to those frustrated and beat up by those who practice abusive behaviors.

2 thoughts on “The Fine Line of Abuse: Relating on a Continuum”