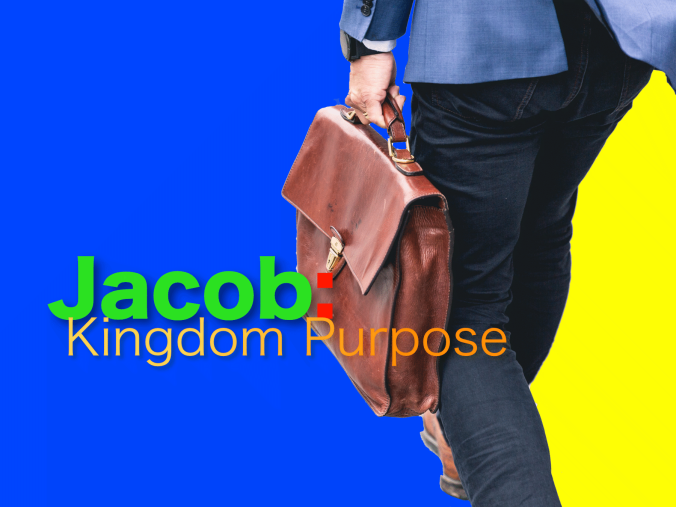 Jacob is doing kingdom work. But, Jacob is neither pastor, nor missionary.

If every church were filled with Jacobs, the redemptive arm of God would radically change our communities. Of course, the arm of God is never short…but Jacob’s work as an employer in his community shines a light so bright, the darkness has no chance.

But, Jacob’s story began with the realization that he had set himself “up as god.”

As a small business owner in a rural community, he felt he needed “to control everything.” He could not trust his employees to do things right. They might steal from him when he wasn’t looking. They might not have the work ethic he has.

This may have come in part from his childhood experience of abuse. His father controlled everything. The kids were in a constant state of seeking to please their father. They in turn had to control father through their behaviour.

Jacob struggles with “extremes with a project, a budget, or raising the children.” Jacob always needed to appear busy when his father returned home or he would get “yelled at or spanked.” Jacob said when his father could be heard coming, “I frantically scrambled to look like I was…doing something productive.” There was only work, no rest, in his father’s house.

He depends on his wife to help him identify those extremes.

For several years, Jacob had worked in finance. He had one employee. And lots of clients. He was making a good income.

But he had also been involved in a side business. He enjoyed that work and finally decided he would have more time for family if he moved more in that direction. So he moved into the “side” business full-time.

In the process a new opportunity came up: a retail business was for sale. After much analysis and prayer, he decided to take the plunge.

The Most Terrible Night in Memory

Jacob said he did not sleep that night. He said he had the “most stressful and terrible night in memory.” He remembered his “mind went to this black abyss.” He was afraid he was taking his family down. He thought he had made one of the greatest mistakes of his life. He added, “I just wanted out.”

But it was not the price tag as much as it was that he had not seen it coming and wondered what else he had missed. He had to have control. He had to be god of his circumstances. He was out of control of his environment.

It was in the midst of this struggle that he realized he could not control all the chess pieces and if he tried he was going to go crazy. He said it was an “unsustainable” way to live and do business.

And he recognized it came out of a deeper problem of idolatry. Jacob was going to have to trust the Lord in this new venture and that in turn led to trusting his employees. He could not try to control every element of the business but had to have the help of his team.

From a leadership model, it is important to give power and responsibility to your team of employees. Getting the right people on the bus, as Jim Collins instructs (“Good to Great”), and then giving them power to complete their tasks is the kind of leadership that Jacob is now developing.

In his view this is simply a “kingdom-building” approach to business ownership. When he had his “aha” moment, he knew his primary goal needed to be to care for his employees.

He turned to Matthew 6 where Jesus says on the Sermon on the Mount:

He wanted to get on to Matthew 6:25, the section of Jesus’ sermon where he gives encouragement that God provides for the needs of his children [Look at the birds of the air: they neither sow nor reap nor gather into barns, and yet your heavenly Father feeds them.]. Jacob wanted a “lucky charm” from scripture to help him trust that everything would be alright.

But he realized as he read on in Matthew 6 that the part about God providing for his children comes in the context of this passage about not storing up treasures on earth.

Jacob was challenged by this reading. He said, “Don’t set your hope in what you prize…in those things that are temporal. Don’t put your hope, desire, and joy in things that drive you in the place of that which is eternal and secure and won’t go away.”

He believed God was speaking to him at that moment and that his focus had been entirely “on the numbers.” He explained he had to give up his idols but realized that God “doesn’t ever say, don’t freek out about losing your idols, God will take care of it!”

He said God was in essence saying, “Jacob, love people well. Be a good employer and I will take care of everything else.” He said, “That is kingdom purpose! Use this opportunitiy to be a good employer, taking good care of the people.” Jacob said, “That’s how [God] provides for his people to be about kingdom work – caring for, loving people is kingdom work.” He added, “My getting rich isn’t a kingdom focus.”

Jim Collins described his research into the most successful corporations to determine what made them tick. One of the common denominators between these diverse companies was a leader who cared for the company so much that his pay was not the driving factor in his commitment to the company. These CEO’s wages were often much less than CEOs of other comparable corporations that did not perform as well.

In addition, these CEOs had the humility to practice what Collins called the mirror and window approach to leadership. When things were not going well for the corporation, the CEO would look at the man in the mirror and take the blame. When the company was producing well, the CEO would look out the window and give credit primarly to his employees.

Though “Good to Great” is not an overtly Christian text on business management, the research identified what can be understood as biblical principles of management.

That perspective drives everything Jacob does as an employer including the wages he pays. He has spent much time struggling through what God would have him pay his employees, always mindful of the world’s standards.

In the 1950s the average CEO made nearly 20 times the average worker. Today, the average S&P 500 Index firm paid their CEO 361 times the salaries of the “rank-and-file worker” according to Forbes. Jacob wants to serve his employees with above-average pay and he wants it to be a living wage.

Jacob has a redemptive, dominion-taking mindset that is sorely lacking in our wealth-driven society.

It is the Jacobs in our cities that truly make them communities. They point the spotlight on the God who has gifted his people and given them opportunity to tend and cultivate our world.