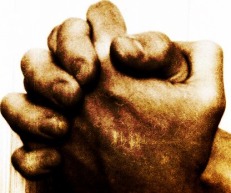 Our CEO’s wife was a bear. She bragged how she would run off roommates in college so she could have the room to herself. On the other hand, her husband was rather charming. You mostly knew where you stood with her – in the doghouse. But, her husband…he manipulated circumstances with great skill. There are times when a Christian struggles with what kind of attitude he should have towards a boss who seems quite beyond the reach of the Gospel.

Maybe the boss is unwilling to see his evil behavior. Maybe the power differential between the boss and subordinate makes it non-condusive to confronting the boss’ sin. Maybe attempts have been made to bring reconciliation in the relationship and failed miserably. In fact, maybe the attempts made it even worse.

Christians read the Psalms and find statements that seem to conflict with the open-hearted, mercy-oriented, forgiveness-driven Gospel we preach from our pulpits. King David, a man after God’s own heart, says,

Psalms 55:12-15 (ESV)
For it is not an enemy who taunts me—
then I could bear it;
it is not an adversary who deals insolently with me—
then I could hide from him.
But it is you, a man, my equal,
my companion, my familiar friend.
We used to take sweet counsel together;
within God’s house we walked in the throng.
Let death steal over them;
let them go down to Sheol alive;
for evil is in their dwelling place and in their heart.

One commentary on the imprecatory Psalms said, “These prayers awaken the conscience to the human cry for redress, the cosmic demand for moral order and justice. They can lead one to feel as deeply as one ought the horrendous insult to Yahweh and his creation perpetrated by those who lie and cheat and kill and abuse and blaspheme…These prayers awaken that outrage, which is to be offered to God and which motivates to redemptive action.”

When I have spoken with Christian employees about Psalm 55, they were clearly uncomfortable with the judgmental character of it. Even among theologians there is obvious discomfort. More often than not, the words of David are ignored or downplayed and it is suggested we should pray for evil people to be redeemed…not destroyed.

In my own experience, it was not until serving under a toxic boss and doing research into the dynamics of abuse that I began to understand the imprecatory Psalms.

In Matthew 7, Jesus calls those who do not respond well to confrontation, “pigs,” and suggests silence rather than confrontation. David, in Psalm 55, takes it a step further, praying for the judgment and destruction of his enemies. He says, with apparent assurance, “But you, O God, will cast them down into the pit of destruction.”[2]

For several of the participants, David’s struggle was very familiar, as it was for my wife and me. David noted that his enemy is not an unknown person. He is David’s friend. David calls him “my equal, my companion, my familiar friend.”[3]

David says he could have tolerated “oppression and fraud,” however “what incurs his wrath is the treachery of a trusted friend.”[4] The psalmist explains it was not an adversary who oppressed him, but an individual who he took “sweet counsel together.”

The word, counsel, “implies intimacy,” according to The New Strong’s Exhaustive Concordance of the Bible. Donald Guthrie says, David “had known unity of heart” with this friend “as they worshipped God” together.[5]

Some of my interviewees believed they had good relationships with their leader. Many worshiped, worked, recreated, and socialized with their leader. The Christian organization is sometimes a family-like setting. Often the mission station is a tight-knit group living communally.

Adam, one of my missionary friends, believed his relationship with the CEO was professional, but he also recalled being taken to dinner and enjoying family outings together. Graham said, “We really, really thought we were a Christian family.” My family went on vacations, to dinner, concerts, and to church with our leaders.

When abuse became apparent, the participants were often surprised and confused by the dysfunction in the organization. They, like abuse victims Lundy Bancroft describes, were perplexed by the cruelty displayed by these “friends.”[6]

However, like some commentators, the participants were hesitant to pray as David prayed in their situation. Guthrie said, David was God’s “anointed king” and so had a get out of jail free card. He distinguished his circumstances from normal relational conflict. Yet, the Psalms were sung in worship by all Israel, not just David.

Graham, an interviewee, specifically sought to keep such thoughts of “adversary” or “enemy” out of the team’s thinking as he and other employees went through the steps of confrontation with the CEO. To this day he refuses to use this terminology. I heard about a well-known pastor’s experience when an elder in his church was creating division and strife. People were praying for the pastor and the elder died unexpectedly. But, the pastor was unwilling to suggest it was due to God’s judgment.

The Prerogative of a Sovereign God

However, one of the commentators on Psalm 55, Gerhard Vos, believes it is appropriate to ask for God’s judgment on evil. He says, “The total destruction of evil…is the prerogative of the sovereign God.” Some consider it “loving” to refrain from praying for the destruction of an evil person. But, it is important to consider not only the perpetrator, but his victims.

How loving is it to suggest the diabolical one keep reaping destruction on his followers? Is it not more loving to look out for those under his oppression – a perspective that God seems to lean heavily towards in His Word – rather than in any way supporting the abuser? Even when a deeply, unrepentant, evil person repents, it is likely the abuse will continue for some time while God sanctifies him.

Vos goes on to say,

“It is right not only to pray for the accomplishment of this destruction, but even to assist in effecting it when commanded to do so by God himself.”[7]

“Assisting” in the destruction, as Vos suggests, may mean seeking his firing. Or calling him to account before others. The final steps of the Matthew 18 principle of confrontation involve group confrontation and shame. This may be the only way others will find relief from his abuse. This is loving!

There is a clear distinction in scripture between those who continually refuse repentance and those who have a “heart of flesh” that is teachable. There is a time when trying to “work with someone” comes to an end and public disgrace is necessary to bring justice to the broken-hearted.

This is God-given direction for confronting evil: Praying that God’s mercy will save those suffering from the destruction of the evildoer and doing all in our legitimate power to stop the abuse.

[7] Gerhard Vos, “The Ethical Problem of the Imprecatory Psalms,” 135.

5 thoughts on “Imprecatory Praying: The Mercy of Destruction”