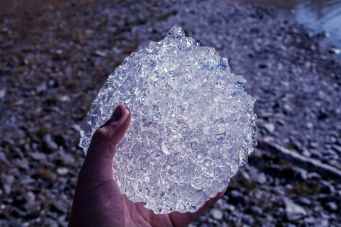 You can become numb from the cold and feel the pain no longer. But, in the end, you have 4th degree frostbite.

Trauma is like that. Targets of abusive behavior in both home and organization become numb to the pain they experience as they live in it day in and day out.

It is their new normal. Numbness.

Sometimes the desired numbness is elusive, but in their commitment to the marriage or organization they press through the pain believing in the end things will be better. Everyone has to suffer the effects of sin, after all.

The Results are Catastrophic

However, the effects of trauma build. As damage is done to the emotional, physical, and spiritual wellbeing of the target, the long term neurological affects grow. Where my family faced limited abuse, resulting in a few symptoms, an individual in an abusive relationship or interacting with an abusive boss on an hour to hour basis will likely have 4th degree frostbite.

Following our resignation from the Christian mission organization, with which we worked eight years, we lived in fear of seeing the CEO. We continued to live on the organizational compound in a foreign country for two months and so had no choice but to interact periodically with him. Trauma specialist, Bessel van der Kolk says,

“Traumatized people look at the world in a fundamentally different way from other people. For most of us a man coming down the street is just someone taking a walk. A rape victim, however, may see a person who is about to molest her and go into a panic.” [Loc. 483]

Even after returning to the United States, whenever we saw an ATV, the CEO’s primary mode of transportation on the compound, we had a sudden quickening of the pulse.

And yet, it is relative. Our trauma, though significant for us, was nothing like a woman who has been abused by her husband for 20 or 30 years. For her, simply going to a place where she may possibly see him is overwhelming.

Susan, an abuse survivor, had started taking walks in her small town because she had not seen her perpetrator for several months. Then she saw his vehicle. It was enough to put her in panic mode. The trauma she has faced is deeply embedded through her years of hanging in there, encouraged by a church culture formed by a lack of understanding of abuse.

According to van der Kolk, a normal person reacts to some type of threat with a rise in their stress hormones. He says, “As soon as the threat is over, the hormones dissipate and the body returns to normal.” But, that is not the experience of those traumatized. “The stress hormones of traumatized people, in contrast, take much longer to return to baseline and spike quickly and disproportionately in response to mildly stressful stimuli.” [Loc. 1032]

According to “The Leader’s Journey,

“As effective as the threat response is in keeping us alive during a moment of crisis, it creates a terribly ineffective state for a person to live in for any length of time.” [Loc 466]

Neurologists have found that when the chemicals resulting from trauma are coursing through out brains we do not think. According to van der Kolk,

“Trauma results in a fundamental reorganization of the way mind and brain manage perceptions. It changes not only how we think and what we think about, but also our very capacity to think.” [Loc. 560]

No wonder when, in the midst of a confrontational discussion, we are frustrated by our inability to respond well. We often think later of all the ways we should have responded at the time. Van der Kolk again says,

“Broca’s area is one of the speech centers of the brain, which is often affected in stroke patients when the blood supply to that region is cut off. Without a functioning Broca’s area, you cannot put your thoughts and feelings into words. Our scans showed that Broca’s area went offline whenever a flashback was triggered. In other words, we had visual proof that the effects of trauma are not necessarily different from — and can overlap with — the effects of physical lesions like strokes.” [Loc. 973]

You just cannot think when traumatized.

Recently, I heard the story of a woman abused for over 30 years being “flagged down” by her ex-husband on the road. She stopped. Some would say, “Why in the world did you stop?” Actually, the answer is quite simple. She is suffering from trauma.

It is not that we are stupid, as one woman told me about her hanging in there with her abuser. It has nothing to do with intelligence, but basic neurological responses to trauma.

“While we all want to move beyond trauma, the part of our brain that is devoted to ensuring our survival (deep below our rational brain) is not very good at denial. Long after a traumatic experience is over, it may be reactivated at the slightest hint of danger and mobilize disturbed brain circuits and secrete massive amounts of stress hormones.” [Loc. 231]

How can targets of abuse get beyond disturbed brain circuits?

I would hope the church, God’s bride and repository of the “heavenly blessings” [Ephesians 1:3], would be a place of peace and comfort for the abused. The church can be a tool of healing and safety for those seeking to get free from abusive partners and bosses.

Unfortunately, our Evangelical church culture feeds a stick-to-it-ness as we espouse biblically faulty views of authority and marriage. According to Kimi Harris in a recent Christianity Today article, “Research confirms that victims stay silent because of a negative community culture toward abuse and often don’t receive emotional support.”

A significant portion of the church misunderstands the depth of evil prevalent in abuse [see article], and as a result easily conclude the target is the perpetrator or “just not gracious enough” to those whom God has given authority roles. As Baker points out, “This can lead to interrogating the victim with questions that imply guilt or cast suspicion onto the victim.”

Some of the comments commonly heard from church members are, she “took it wrong,” was “too sensitive,” the target is “reading into things,” “is exaggerating.” or it “takes two to tango.”

Where the church should be a safe place for those who are suffering abuse to share their experience and receive support to get out before the trauma is too deeply entrenched, the church often is not that place.

I have stood helplessly by watching multiple individuals face greater trauma from their church family as they sought relief from abusers. This is particularly unfortunate in that the church can be an important place to gain safety and heal from the affects of trauma.

Again, Harris says (quoting Connie Baker), “This community support is good for our brain and neurology. It’s how we cope.”

In His infinite wisdom, God has created an “institution” that is optimum for help and healing. But, the “isolation” the church family often creates “brings continued shame and confusion.” The trauma can be worsened.

Rachael Denhollander, an American lawyer and former gymnast, was the first woman to publicly accuse Larry Nassar, the former Michigan State University and USA Gymnastics doctor, of sexual assault. She says normally we only “get one chance to be a safe place for a victim,” making it imperative that the church learn about abuse.

She noted in her experience she had little support early on from a church family. It made it particularly hard to find healing from the trauma. Bessel van der Kolk highlights the problem:

“People who have not shared the traumatic experience cannot be trusted, because they can’t understand it. Sadly, this often includes spouses, children, and co-workers.” [Loc. 497]

The church needs to understand abuse and the traumatic results so that when someone comes forward to share their hurt they will be cared for.

The church needs to be the place where survivors can talk about their experience. Psychologists agree that traumatic experiences must be expressed by the victim. They must be able to talk about it.

Denhollander encourages survivors seek out “one safe person to whom they can disclose—someone who can help them reclaim their voice, ‘who can grieve with you, and who can affirm the truth to you when it’s too difficult to hold on to it yourself.’” [Harris]

However, it is imperative that there be ways of helping the body “learn that the danger has passed and to live in the reality of the present” according to van der Kolk. [Loc. 562] This may take treatment from a counselor who is knowledgable in trauma.

Time will not heal trauma. It is imperative that steps be taken to reorganize spiritually, physically, and emotionally. Finding help in that process is crucial.

Have you found healing from abuse? Please share it with us.

4 thoughts on “Trauma: Get Out While the Getting’s Good”